Wild relatives of crops are becoming increasingly valuable to plant researchers and breeders. During the process of domestication, crops tend to lose many genes, but wild relatives often retain genes that could be useful – such as genes that confer resistance to... On May 31, Boyce Thompson Institute welcomed 41 of the country’s brightest undergraduate students from universities around the country to experience the life of a researcher for 10 weeks. Ten more research interns from local area high schools will join the Institute... Most of us are familiar with “spinach teeth,” the harmless but gritty-chalky mouthfeel caused by the vegetable. A team of researchers from Boyce Thompson Institute (BTI) and six Chinese universities has identified genes in spinach that regulate its concentration of... Tomato’s Wild Ancestor Is a Genomic Reservoir for Plant Breeders

Thousands of years ago, people in the region now known as South America began domesticating Solanum pimpinellifolium, a weedy plant with small, intensely flavored fruit. Over time, the plant evolved into S. lycopersicum – the modern cultivated tomato. Although today’s... The fabled Silk Road – the 4,000-mile stretch between China and Western Europe where trade flourished from the second century B.C. to the 14th century A.D. – is responsible for one of our favorite and most valuable fruits: the domesticated apple (Malus domestica).... In order to shift from water to land – a transition that still puzzles scientists – plants had to protect themselves from drying out and from ultraviolet (UV) radiation, and they had to develop structures to support themselves without the buoyancy provided by water.... When many people think of watermelon, they likely think of Citrullus lanatus, the cultivated watermelon with sweet, juicy red fruit enjoyed around the world as a dessert. Indeed, watermelon is one of the world’s most popular fruits, second only to tomato – which many... On June 3, Boyce Thompson Institute welcomed 35 of the country’s brightest undergraduate students from universities around the country to experience the life of a researcher for 10 weeks. Eight more interns from area high schools will join the Institute for seven... Tomato breeders have traditionally emphasized traits that improve production, like larger fruits and more fruits per plant. As a result, some traits that improved other important qualities, such as flavor and disease resistance, were lost. Researchers from Boyce... 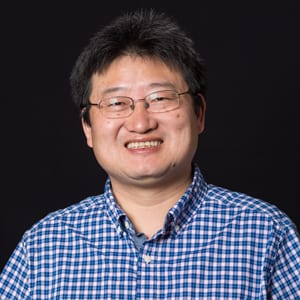 David Stern, president of the Boyce Thompson Institute (BTI), is delighted to announce that faculty member Zhangjun Fei has been promoted to Full Professor on February 27, 2019. Fei was evaluated on his achievements to date and the potential he possesses. Fei has made... Recently developed gene editing tools like CRISPR/Cas enable scientists to figure out the functions of myriad plant genes. While these studies could eventually lead to the creation of crops with improved traits like increased disease resistance or higher yield,... Orange is the new white: New sweetpotato data is something to be thankful for

The genome sequences of I. trifida and I. triloba can be used as robust references to facilitate sweetpotato breeding. The genomic resources developed in this study set the stage for increased rates of genetic gains for key traits such as yield, resistance to disease, and high beta-carotene. Back to our roots: Insights from genomes of a plant-associated fungus and its bacterial endosymbionts

In an article published this month in the journal New Phytologist, researchers at the Boyce Thompson Institute and the National Center for Genome Resources describe the genome sequences (DNA sequences), of the fungus Diversispora epigaea (formerly known as Glomus... Researchers from the Boyce Thompson Institute (BTI) and partnering institutions in China, the U.S., and New Zealand, report their findings on the domestication of the pear in Genome Biology. Researchers at BTI, Cornell and USDA published a spatiotemporal map of gene expression across all tissues and developmental stages of the tomato fruit – the genetic information underlying how a fruit changes from inside to out as it ripens. Their data is available in the new Tomato Expression Atlas (TEA). In their findings, researchers compared the sequenced bottle gourd genome to those of other cucurbit species, allowing them to reconstruct the ancient genomic history of the Cucurbitaceae family. For some, pumpkins conjure carved Halloween decorations, but for many people around the world, these gourds provide nutrition. Scientists at Boyce Thompson Institute (BTI) and the National Engineering Research Center for Vegetables in Beijing have sequenced the genomes of two important pumpkin species, Cucurbita maxima and Cucurbita moschata. New research out of Boyce Thompson Institute reveals surprising insights into the genetic exchange along the Silk Road that brought us the modern apple. Today in Nature Communications, researchers from BTI and the Shanghai Normal University report a new draft genome of Spinacia oleracea, better known as spinach. Additionally, the authors have sequenced the transcriptomes (all the RNA) of 120 cultivated and wild spinach plants, which has allowed them to identify which genetic changes have occurred due to domestication. Many BTI researchers will present their latest research at the 13th annual SolGenomics Conference, Sept. 12-16 in Davis, California. The Watermelon’s Past, Present, and Future

Watermelons have changed from a small, bitter fruit that grows wild in Africa to the most popular fruit in the world. What’s next for watermelons? What will your dinner plate look like in 2050? With discoveries from the Boyce Thompson Institute, future crops may have more nutrients and greater resistance to insects, drought and disease. A consortium of 20 researchers is using advanced genomic techniques to accelerate the development of disease-resistant varieties of cucurbit crops. BTI Associate Professor Zhangjun Fei will lead the bioinformatics and genomics part of the initiative. From Flower to Fruit: Study Reveals Details of Tomato Formation

BTI Researchers pinpointed which genes are important at different stages of tomato fruit development by monitoring how gene expression changed in the first four days after a flower becomes pollinated. “My experience was really valuable…It confirmed the fact that I want to do science…science doesn’t work a lot of the time…it’s having the motivation and determination to tackle problems that you’re always going to come across.” Juan G Boyce Thompson Institute Scientist Zhangjun Fei has teamed up with scientists from across the country to generate a comprehensive global virus distribution map for tomatoes.