When many people think of watermelon, they likely think of Citrullus lanatus, the cultivated watermelon with sweet, juicy red fruit enjoyed around the world as a dessert. Indeed, watermelon is one of the world’s most popular fruits, second only to tomato – which many consider a vegetable. But there are six other wild species of watermelon, all of which have pale, hard and bitter fruits.

Researchers have now taken a comprehensive look at the genomes of all seven species, creating a resource that could help plant breeders find wild watermelon genes that provide resistance to pests, diseases, drought and other hardships, and further improve fruit quality. Introducing these genes into cultivated watermelon could yield high-quality sweet watermelons that are able to grow in more diverse climates, which will be especially important as climate change increasingly challenges farmers.

“As humans domesticated watermelon over the past 4,000 years, they selected fruit that were red, sweet and less bitter,” said Zhangjun Fei, a faculty member at Boyce Thompson Institute and co-leader of the international effort. As described in a paper published in Nature Genetics on November 1, the researchers made these insights using a two-step process. First, they created an improved version of a “reference genome,” which is used by plant scientists and breeders to find new and interesting versions of genes from their specimens.

“Unfortunately, as people made watermelons sweeter and redder, the fruit lost some abilities to resist diseases and other types of stresses,” said Fei, who is also an Adjunct Professor in Cornell University’s School of Integrative Plant Science.

Fei co-led the creation of the first watermelon reference genome using an East Asian cultivated variety called ‘97103,’ which was published in 2013.

“One major discovery from our analysis is that one wild species that is widely used in current breeding programs, C. amarus, is a sister species and not an ancestor as was widely believed,” Fei said.

Indeed, the researchers found that cultivated watermelon was domesticated by breeding out the bitterness and increasing sweetness, fruit size and flesh color. Modern varieties have been further improved in the past few hundred years by increasing sweetness, flavor and crispy texture. The researchers also uncovered regions of the watermelon genome that could be mined to continue improving fruit quality, such as by making them bigger, sweeter and crispier. 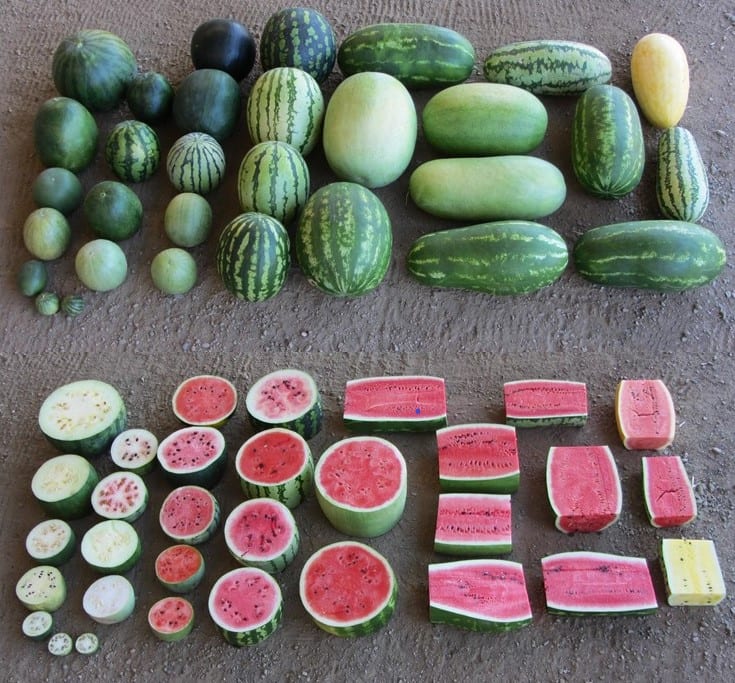 In the past 20 to 30 years, plant breeders have crossed cultivated watermelon with the sister species C. amarus and two other wild relatives, C. mucusospermus and C. colocynthis, to make the dessert watermelon more resistant to nematode pests, drought, and diseases like Fusarium wilt and powdery mildew.

These types of improvements using wild relatives is what excites Amnon Levi, a research geneticist and watermelon breeder at that U.S. Department of Agriculture, Agricultural Research Service, U.S. Vegetable Laboratory in Charleston, South Carolina. Levi is a co-author of the paper and provided the genetic material for many of the watermelons used in the study.

“The sweet watermelon has a very narrow genetic base,” says Levi. “But there is wide genetic diversity among the wild species, which gives them great potential to contain genes that provide them tolerance to pests and environmental stresses.”

Levi plans to work with BTI to discover some of these wild genes that could be used to improve the dessert watermelon, especially for disease resistance.

“Watermelon is susceptible to many tropical diseases and pests, whose ranges are expected to continue to expand along with climate change,” says Levi. “We want to see if we can bring back some of these wild disease resistance genes that were lost during domestication.”

In the same issue of Nature Genetics, Fei and colleagues also published a similar paper analyzing 1,175 melons, including cantaloupe and honeydew varieties. The researchers found 208 genomic regions that were associated with fruit mass, quality and morphological characteristics, which could be useful for melon breeding. The two papers were also the subject of an Editorial and a News & Views article in the journal.

Earlier this year, Fei, Levi and colleagues published a reference genome of the ‘Charleston Gray’ watermelon, the principle U.S. variety of C. lanatus to complement the East Asian ‘97103’ genome.