The Watermelon’s Past, Present, and Future While most people enjoy a slice of watermelon on a summer afternoon, many would be surprised to learn that the watermelon is the largest fruit crop in the world*. Humans produce more than 100 million tons of the watermelon fruit each year. Watermelon is especially popular in China, where residents consume more than three times the world average.

But watermelons haven’t always been so popular. They started out as small, hard, bitter fruits, somewhere in Southern or Western Africa. As generations of people selectively planted seeds from fruits that were larger and tastier, they created the sweet, red watermelon we know today. In the process, however, watermelon plants lost much of their genetic diversity. Breeders depend on this diversity to create desirable traits such as the ability to resist infections and withstand droughts.

“The cultivated watermelon has very, very narrow genetic diversity that causes problems for breeding,” said Zhangjun Fei, an associate professor at the Boyce Thompson Institute (BTI). “We need modern tools, such as genomic tools developed for watermelon, to facilitate its breeding and research.” At BTI, Fei is using genomic data and bioinformatics techniques to learn more about how the watermelon evolved and to create tools to improve existing varieties.

But before these tools can be developed, Fei and colleagues need to generate huge quantities of data on the genetics underlying different watermelon traits. They formed the International Watermelon Genome Initiative in 2008 and in 2013 published a draft of the genome of an East Asian variety called 97103, which is round and has striped green skin. For comparison, they have also sequenced the genome of “Charleston Gray,” a large, oblong watermelon variety developed to be disease-resistant and shipping-tolerant by the USDA in South Carolina in the 1940s. They have also sequenced 134 samples from watermelon germplasm collections to begin mapping out a watermelon family tree. 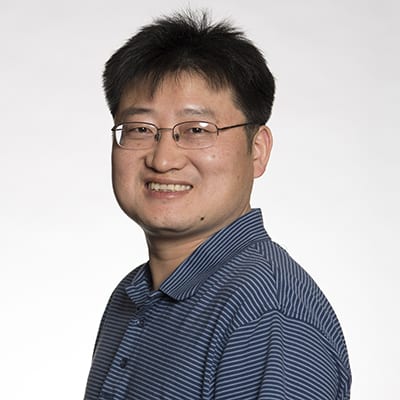 They concluded that as people bred sweeter watermelons with better fruit quality, they inadvertently lost genes that give watermelons resistance to common pests and diseases. They also identified regions of the chromosome that are involved in sugar production, create bitterness and give resistance to Fusarium wilt, a common fungal disease.

Fei and colleagues also investigated the metabolic pathway for citrulline, an amino acid found in the flesh and rind that helps to regulate blood pressure and may even have a Viagra-like effect. Watermelons also contain large amounts of lycopene, a red pigment that acts as an antioxidant and may provide additional health benefits.

In the future, Fei will collaborate with Rebecca Grumet of Michigan State University and 19 other researchers on CucCAP, a USDA-funded project to improve disease resistance in cucurbit crops, such as cucumbers, squash and melons. As the team lead for genomics and bioinformatics, Fei and his lab will genotype 10,000 cucurbit varieties and use the genetic information to develop breeding tool kits for crop improvement, to protect these crops from bacterial, fungal and viral infections. These tools will make watermelon breeding faster and more efficient, ensuring that watermelons will continue to be plentiful in U.S. and abroad.

*As long as you count tomatoes as a vegetable, which most people do.