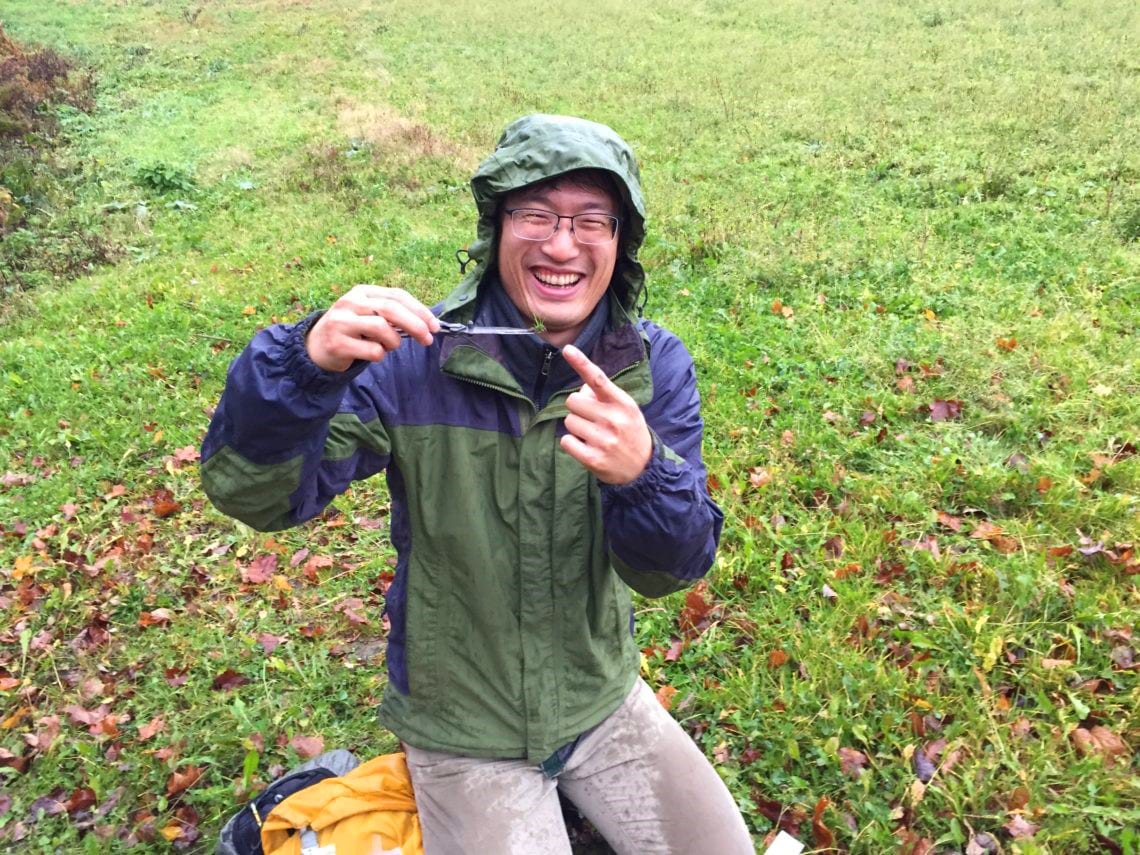 BTI faculty member Fay-Wei Li collects a specimen of the hornwort Anthoceros agrestis in a cornfield in Homer, NY.

Hornworts are a little-studied, ancient group of plants with some very unique biology, including their methods of securing carbon and nitrogen. Unlocking these secrets may help researchers boost agricultural output and use less synthetic fertilizer, as well as provide broader insights into plant evolution.

Unfortunately, there are no genetic tools for determining the functions of hornwort genes, a situation that causes a bottleneck in the advancement of research into these fascinating plants.

“We will be developing these tools that will then be accessible for the entire hornwort research community,” says Van Eck.

One unique thing about hornworts is their symbiotic association with cyanobacteria, which provides the plants with a source of nitrogen.

Other plants also form symbioses with microbes to obtain nitrogen, but those microbes take a lot of carbon in return, which can be costly to the plants. But cyanobacteria are photosynthetic and are thus perhaps not as reliant on the plant host.

“This relative independence makes cyanobacteria a promising, as yet unexplored partner for engineering symbiotic nitrogen fixation into crop plants,” says Li. If successful, such engineering could someday make crops less reliant on fertilizer for their nitrogen, which would have numerous environmental benefits such as less polluted waterways and associated algal blooms.

Hornworts also are the only land plants that have evolved specialized sub-cellular compartments within their chloroplasts, called pyrenoids, which concentrate carbon up to 50-fold. This carbon-concentrating mechanism essentially turbocharges photosynthesis, enabling hornworts to grow much faster than they otherwise would.

“A lot of researchers are trying to install a similar carbon-concentrating mechanism from algae into crop plants to boost their growth and productivity,” says Li. “Crop plants are functionally, structurally, and evolutionarily more closely related to hornworts than to algae, so we think it would easier to transfer whatever we learn from hornworts to crops.”

At this point, however, the plant genes involved in the carbon-concentrating mechanism and the cyanobacteria symbiosis are completely unknown.

“I have a bunch of candidate genes that are involved in symbiosis and photosynthesis, but I cannot test those gene functions without a robust transformation or gene editing system,” Li said. “So developing these tools is what this NSF grant is about.”

Specifically, Li and Van Eck will use the grant funds to work out robust and efficient methods for transforming and editing the hornwort genome in a targeted manner.

These tools will also help evolutionary biologists determine hornworts’ place in the plant kingdom. Along with mosses and liverworts, hornworts are bryophytes and thus lack vascular tissue. But no one knows which bryophyte is most closely related to vascular plants, such as lycophytes, ferns and seed plants.

“Having a model system for hornworts is really important to understand plant evolution,” Li said.

Ted Morgan, NSF EDGE program director, says, “This program allows research communities to address a grand challenge in biology and is part of a bigger effort within our field to better predict how organismal traits arise from genetic variation in natural contexts.”

“Building this fundamental understanding of how genetic changes are connected with organismal traits has a range of significant societal benefits that include predicting organismal responses to changing environments, the development of more effective conservation efforts, new medical approaches and improved crop yields,” Morgan says.