Plant researchers and home gardeners learned about efforts to preserve both ancient traits in the tomato and Cornell’s collection of historical seed catalogs at Mann Library’s Harvesting Heritage event June 5.

Professor James Giovannoni, a researcher at the Boyce Thompson Institute and the USDA Agricultural Research Service, explained why store-bought tomatoes taste so bland and what plant researchers are doing to fix it..

Tomatoes are a $3 billion business in the U.S., with most tomatoes grown at high-density in farms in California and Florida. To ensure that these fragile fruits survive a cross-country trip to the grocery store, breeders have spent decades creating fruits that won’t rot in transit, primarily by controlling the ripening process.

An immature tomato goes through a lot of changes during the ripening process: fruit texture softens, starches become sugars and pigment and aroma compounds increase. The green, inedible tissue turns into a delicious, nutritious fruit to attract consumers that will spread its seeds. 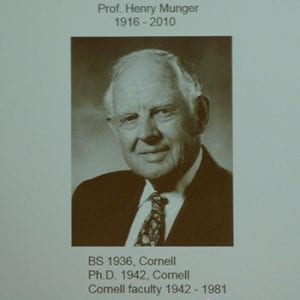 “It suddenly goes through a program that says ‘eat me’,” said Giovannoni. Ripening also makes the fruit susceptible to bacteria and fungi, which will release the seeds when the fruit rots. “That’s really plan B for the seeds. If something doesn’t come along and consume them, the plant wants to get the seeds out of there by rotting,” he said.

But rotten tomatoes are bad for business, so researchers have bred several traits into commercial tomatoes to delay the process.

In the early 1960s, Cornell Professor Henry M. Munger discovered a mutant tomato plant with fruits that failed to ripen. When he hybridized this plant with a normal tomato plant, he created a variety where the fruits ripen more slowly. This characteristic has now been bred into all major commercial tomato varieties, giving farmers two extra weeks to get their produce to market. Breeders have also created varieties where all plants ripen at the same time for more efficient harvesting and that lose their stem when picked, to protect the flesh during transport. Without this change, “by the time you get to the end of the road, you’re salsa at best,” said Giovannoni.

Unfortunately, some of these changes have resulted in bland produce. In his current work, Giovannoni is working with populations developed from crosses of modern tomatoes with ancient varieties in an attempt to understand the genetics of the nutrition and flavor that have been lost. “There’s a great deal of diversity that’s still available from these varieties that potentially have a lot of useful traits, including tolerance to stresses and important fruit traits,” he said.

By peering into the genomes of both wild tomato species and ancient cultivated varieties, Giovannoni and his laboratory members are working to identify beneficial gene sequences that the domestication and breeding processes left out.

In the second half of the event, Marty Schlabach, the Food and Agriculture Librarian at Mann Library spoke about the Ethel Zoe Bailey Horticultural Catalogue Collection and the library’s efforts to digitize the texts.

Cornell horticulturist Liberty Hyde Bailey began collecting seed catalogs soon after coming to Cornell in 1888. He used them as a record of newly introduced crop varieties and of changing trends in horticulture. His donated collection contains more than 136,000 items. The university named it for his daughter, Ethel, who curated the seed catalogs for 70 years, until her death in 1983. Nursery catalogs have evolved from single-page broadsides dating to the 1790s to text booklets, to catalogs with hand-drawn images and later color lithography and photography, to websites. They serve as a resource for plant breeders looking for pest-resistant varieties, museums that wish to recreate historically accurate exhibits and art historians interested in changing illustration techniques.

To digitize and preserve these catalogs, the Mann Library is working with the New York Botanical Garden, the National Agricultural Library at the USDA and the Missouri Botanical Garden, to display the pages on the open-access Biodiversity Heritage Library website. But often, these scanned images are not searchable by text.

“Whenever a publication—a book, journal or seed catalog—is digitized, it’s really just a visual representation of that page,” said Schlabach

To correct this problem, Schlabach is working with the Missouri Botanical Garden, Harvard University, and the New York Botanical Garden to crowdsource a solution. They have created a game called Beanstalk where users type in words and phrases from catalog images—just like entering a reCAPTCHA on a website. As they input more answers, a stalk grows and flowers on the screen. It is aimed at people interested in “benefiting the biodiversity community because it’s going to improve the searchability of the digital texts,” said Schlabach.