Now that kids are back in school, everyone is trying to avoid the latest bug going around, but certain viruses can’t be avoided—like the invisible ones in your food.

Fortunately, most people get their daily dose of virus in the form of plant or insect viruses that are harmless to humans.

A 2005 study found that the most common virus in the digestive track is pepper mild mottle virus (PMMV). The virus, which bleaches leaves and creates lumpy, discolored peppers, frequently occurs in processed pepper products like hot sauce or chili powder. The scientists discovered that PPMV can infect pepper plants even after passing through the digestive track, so humans are likely a bigger threat to pepper plants than their virus is to us. Baculovirus particles enclosed in a protective network of proteins, as seen under a microscope.

The study also identified 34 additional plant viruses that afflict a variety of fruits, vegetables and grains, suggesting that plant viruses can be found in just about any meal. While the viruses do not pose a threat to humans, many of them create unappetizing fruits and vegetables and can reduce yields or even kill the plant.

Insects frequently act as the carriers of these plant viruses, making the viruses more difficult to control. Several BTI researchers study ways to control plant diseases, such as finding genes that give plants better resistance to the infection and sequencing the genomes of insects that spread plant viruses. 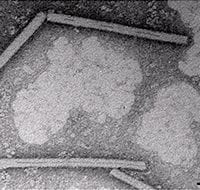 Diseases that infect insects can also piggyback harmlessly on our food. Baculoviruses, such as the kind studied by BTI Professor Gary Blissard, infect insects and other arthropods. The insect ingests the virus while feeding on a contaminated plant. Then the infected insect disperses the virus onto the plant as it dies, continuing the cycle. One study found that cabbages purchased at five grocery stores around Washington D.C. all tested positive for a strain of baculovirus that infects the cabbage looper. A single serving of this cabbage contained up to 100 million virus particles.

Since baculoviruses are safe for humans, farmers can apply them to control insect pests in their fields. Some manufacturers even use engineered versions of baculoviruses to generate seasonal flu vaccines, and they show potential for use in manufacturing therapeutic proteins for use in human gene therapy.

It’s still a good idea to wash fruits and vegetables (and hands!) to prevent the spread of human viruses and bacteria. But consuming the occasional plant or insect virus should be the least of our worries.